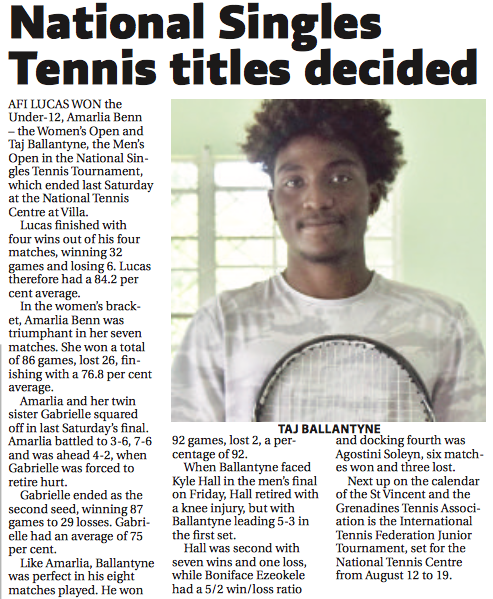 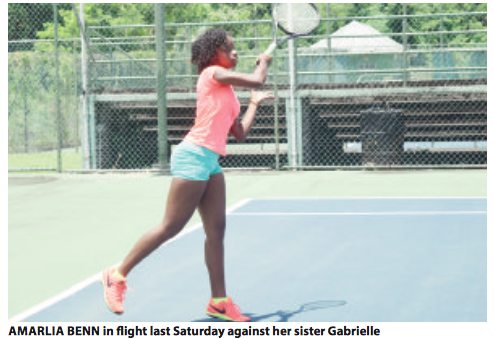 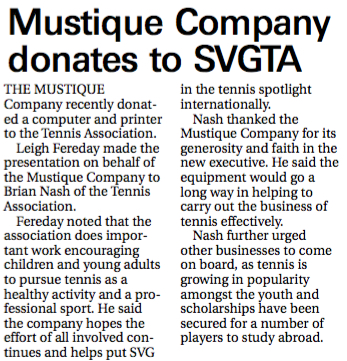 A one day Mini Tournament was held recently at the National Tennis Centre at Villa. 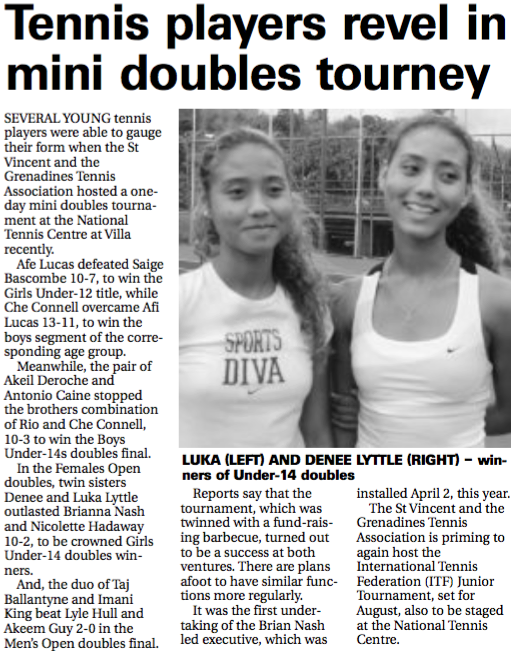 Courtesy of Searchlight Newspaper – May 10th, 2016

Since election new executive has been busy

KINGSTOWN, ST. VINCENT AND THE GRENADINES – Last Saturday, the St. Vincent and the Grenadines Tennis Association held its Mini-Doubles tournament and barb-be-que at the National Tennis Centre at Villa.

In on court action in the Girls Under 12’s final: Afe Lucas defeated Saige Bascombe 10-7, while in the Boys under 12’s: Che Connell defeated Afi Lucas 13-11.

Meanwhile the St. Vincent and the Grenadines Tennis Association held an executive meeting on Tuesday evening May 03, 2016, with one of the items on the agenda was a review of the Mini-Doubles Tennis Tournament and bar-be-que last Saturday.

Following the said review, it can be reported that last Saturday’s Mini-Doubles Tennis Tournament and bar-be-que was a success.

Scores of kids of various age groups and their parents, along with past executive officials of the SVGTA, took part in the day long activity.

The executive at Tuesday’s meeting also took the decision to host such events on a regular basis, for it serves a multiplicity of purposes. These purposes will serve the development of the sport of tennis in St. Vincent and the Grenadines positively, as the current executive seeks to lay down a pathway, which would allow members, players, and supporters to assist the SVGTA in realizing its potential in all facets.

Since its election into office on April 02, 2016, the SVGTA Executive has been very busy. Meetings have been held with the Minister of Sports, the Manager of the National Sports Council, and the Chairman of the National Lotteries Authority; in addition to meeting with the immediate past president of the SVGTA.

Plans are being put together for the hosting of the 2016 International Tennis Federation Junior Tennis Tournament; a responsibility of the recently installed ITF Tournament Committee.

This ITF tournament will be played in August and will see scores of players from many countries descending unto the shores of St. Vincent and the Grenadines, as they along with the Vincentian counterparts, seek glory on the tennis courts at Villa in a bid to gain international points.

New executive elected to govern Tennis in St. Vincent and the Grenadines

The new executive who will hold office for the next two years is as follows -:

The new executive has hit the ground running due to a number of factors, and is expected to hold its first meeting on Monday April 04, 2016.

This meeting is to lay the groundwork in addressing a number of issues, but not limited to COTECC and ITF fees, preparation for the hosting of the 2016 International Tennis federation Junior Tennis tournament, preparation of leading junior players for future tournament, proper management systems for the National Tennis Center, reconciliation of finances, strengthening of relationships with the private sector, all age-group tennis tournaments, implementation of a grassroots tennis program, programs for coaches and other technical personnel within the association, and overall improvement of the management of the sport of tennis in St. Vincent and the Grenadines.

Newly elected SVGTA president Brian Nash in his welcome remarks on Saturday night expressed thanks to the outgoing remainder of the past executive, for their efforts, and wished them well in their future endeavors.

Meanwhile Nash congratulated the players returning from tennis tournament in Barbados and Trinidad and Tobago, stating, “I would like to congratulate our team on matches won.